Our accommodation in West Yellowstone was a rental house way to big for us, but since we were paying by the person it still came cheaper than a hotel. It had four bedrooms, two on the second floor and two in the basement and a living room and a kitchen on the first floor. It came equipped with a cable TV and grill which came in handy in the evenings. The best part about the house was that is was located very close to the park’s entrance so we didn’t have to drive additional miles – the park is big enough as it is.

On our first day in Yellowstone we went to see the geysers and we started with the most famous one. Old Faithful is where everybody goes and we were lucky to get there 10 minutes before it was scheduled to erupt. Old Faithful erupts every 80 minutes and it’s probably the most predictable geyser in the park. Based on the duration of the last eruption, rangers are able to figure out a time frame for the next eruption. There were crowds of people sitting on benches around the geyser perimeter and waiting patiently in a complete silence like some religious ceremony was about to take place and our voices would ruin the experience. It started with some steam and a little spray and then it erupted into a tall stream of water and steam. The show finished and everybody started in the direction of their car but we decided to stick around and see the rest of the geysers in the upper geyser basin. 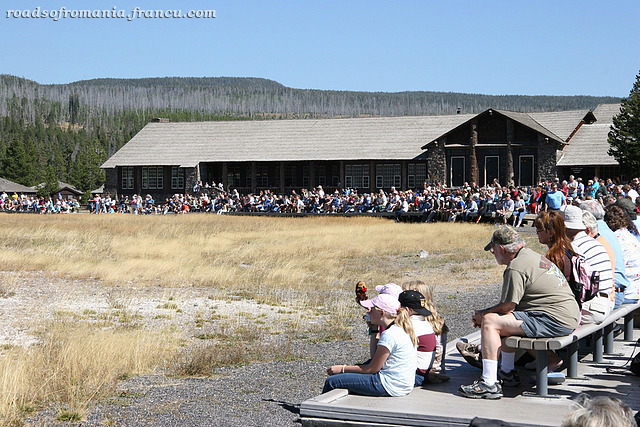 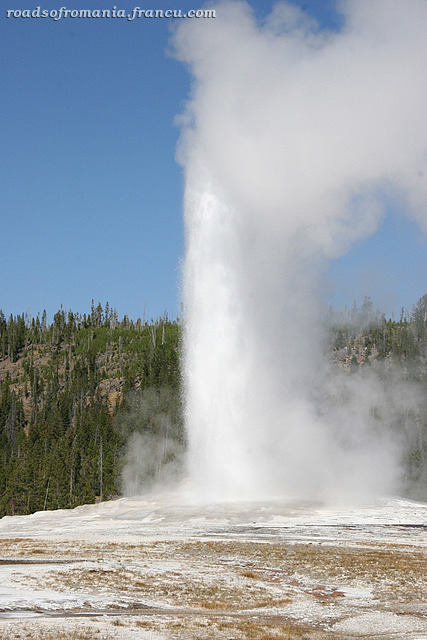 We followed a trail to the Observation Point up a little hill where we got a good view of the entire basin. On the way to the Observation Point we passed very close by a bison – our first encounter with the creature which used to roam these lands 150 years ago before it was hunted close to extinction during the 19th and early 20th centuries. We were to see many more the following days so I guess they’re no longer endangered. After Observation Point we went around the boardwalk at the upper geyser basin and looked at even more geysers while being surrounded by an all mighty rotten egg smell. Castle Geyser started erupting and it went on for half an hour. We saw Old Faithful erupting one more time, this time from a different angle and we headed for the Old Faithful Inn. 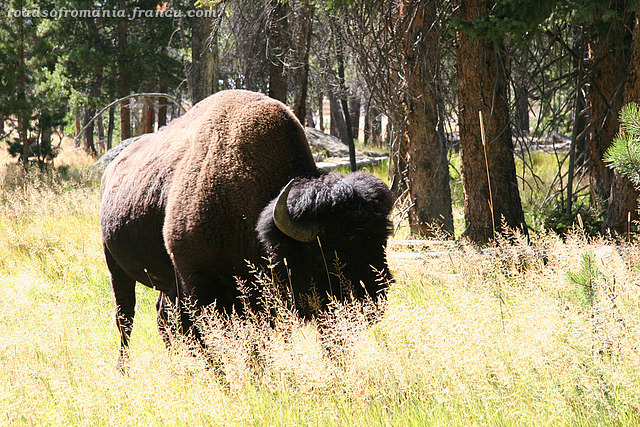 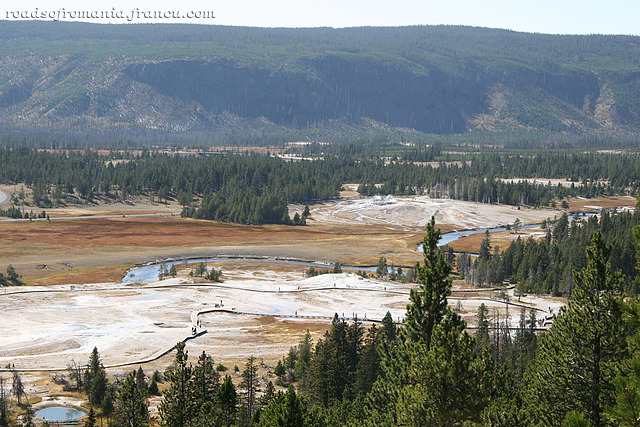 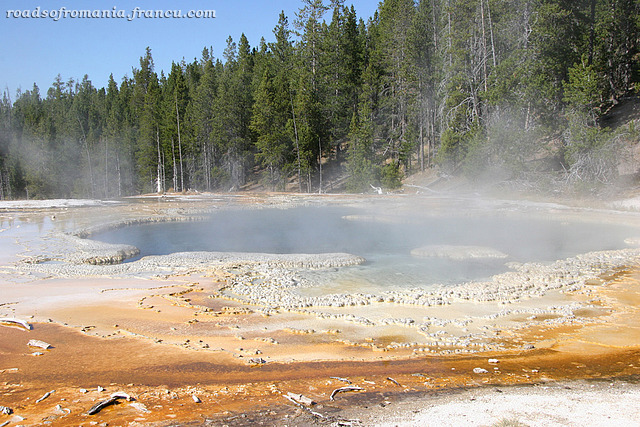 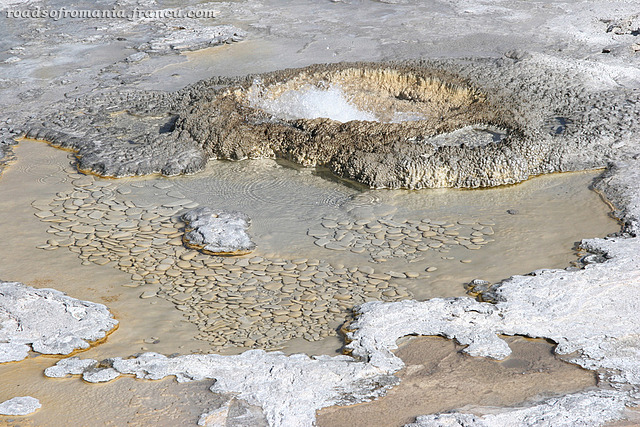 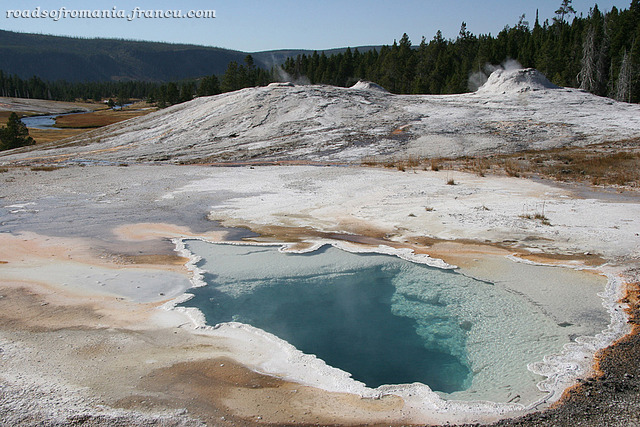 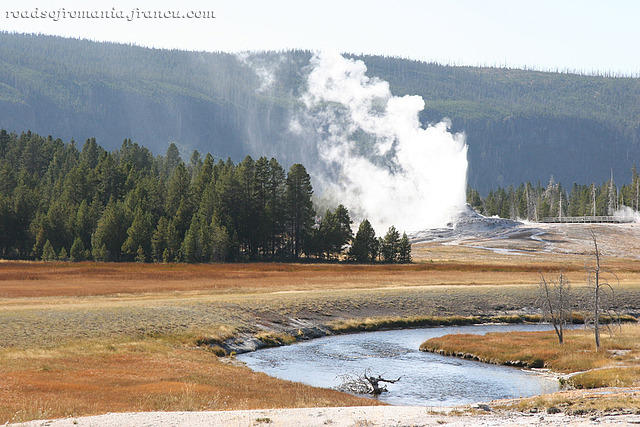 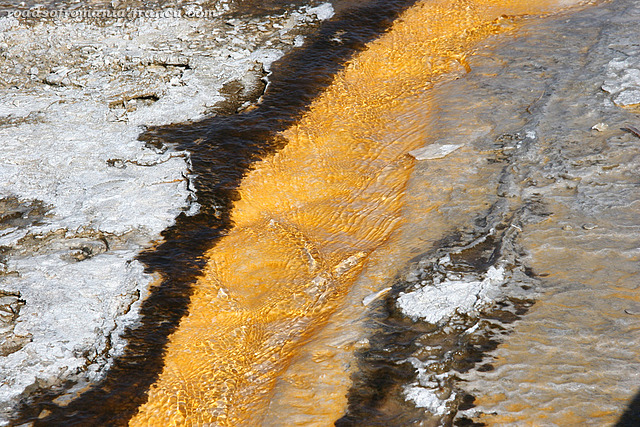 The inn is a rustic looking lodge made of logs dating from the beginning of the century. It’s very impressive looking on the inside and the lobby was full of photographers trying to capture a image of the log work above us. We decided to eat dinner at their dining hall. The badge of the girl at the reservation counter read her name and underneath it “Romania” so I started to talk to her in Romanian. She’s been working on a 3 months temporary contract in Yellowstone and she was very happy to meet us. I guess she didn’t meet many Romanians during those 3 months. But we couldn’t chat long, since there was a line behind me. Cris and Alin tried to be creative when ordering food and they ordered bison and elk but frankly my lamb was much better. From this early dinner we went to catch the sunrise at the middle geyser basin by the Grand Prismatic Spring which colors looked spectacular at dusk. 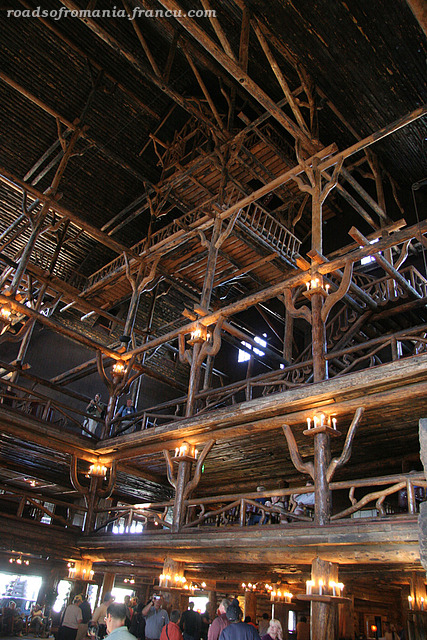 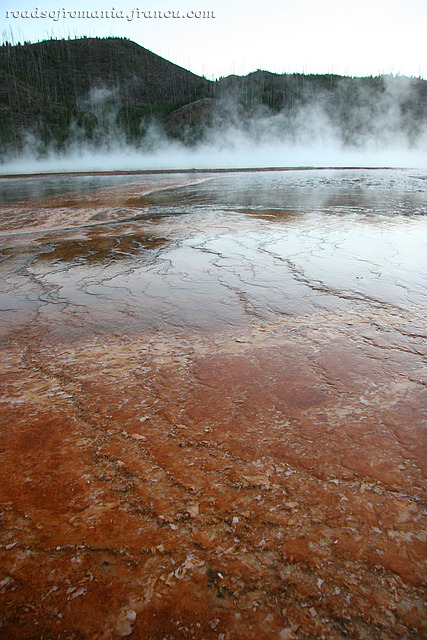 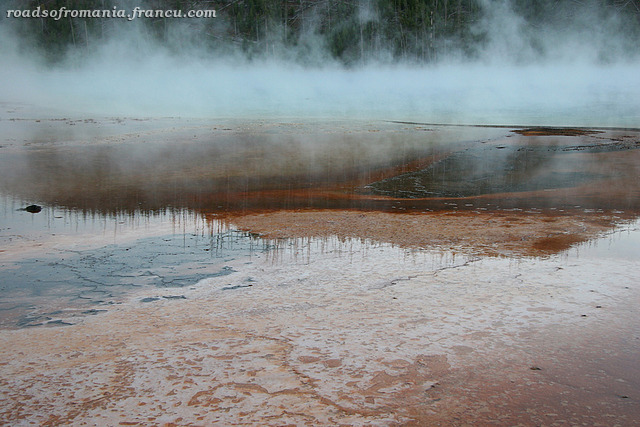 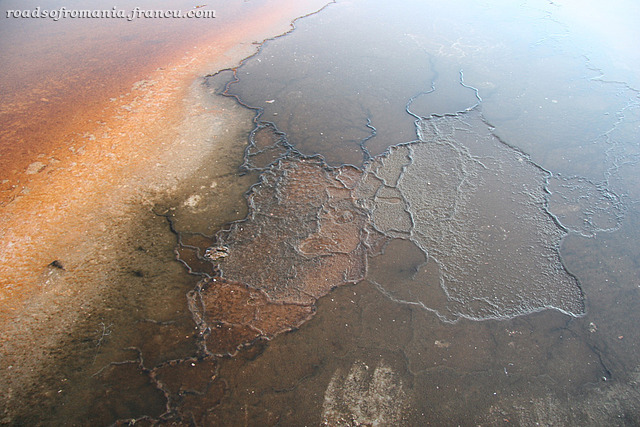