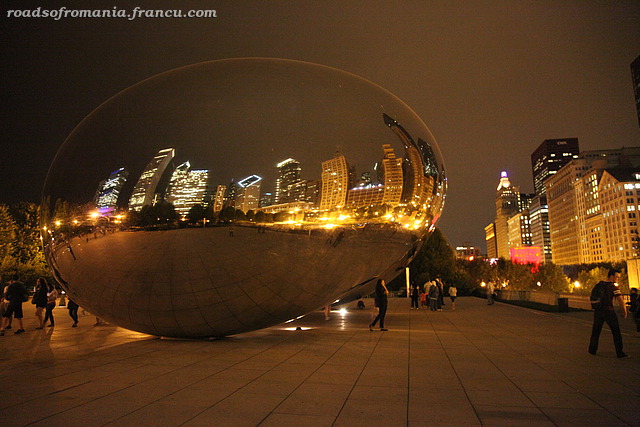 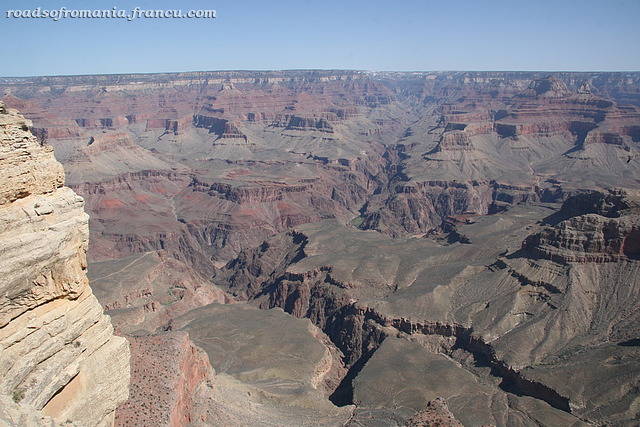 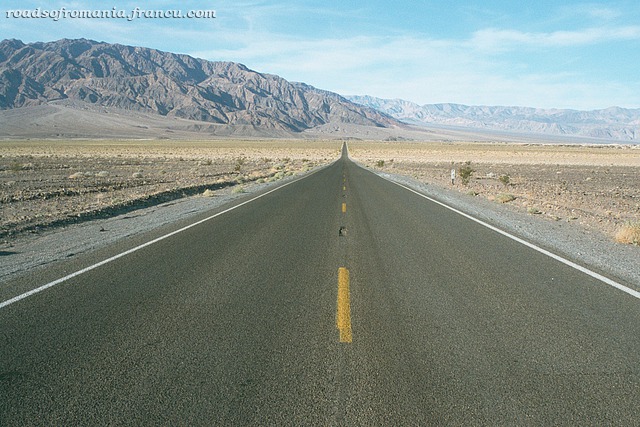 I’ve decided to take a short break from the Australian story but not to worry I’ll be back soon with more about the trip down under. The break is due to the fact that I wanted to write the first post of what I hope to become a series on American destinations. This idea was prompted by a posting on a Romanian blog, where the author asked the readers to name the popular destinations that don’t attract them. Among the places listed many of the readers mentioned United States as being unattactive for them. Having lived in USA for quite a few years and traveled around many parts of it, I think many people have the wrong impression about what’s to see in United States. Most have the idea, undoubtely promoted by the many movies and TV series, that America is made of NY and LA and maybe the Grand Canyon. While NY and LA are one facet of USA, there’s much more to see around the country, beautiful places that are truly unique.

For this first post of the series I picked a place that I really enjoyed, so much so that I went back three times to visit it again: Death Valley National Park.

Located in east-central California, on the border with Nevada, Death Valley is one of the most interesting places to visit in the southwest USA. This national park holds a number of records like being the lowest place in North America (282 feet below sea level), the driest and hottest place in the Western Hemisphere (highest temperature on record of 57.8 °C on June 10, 1913 is close to the world record of 57.8 °C registered in ‘Aziziya, Libya, on September 13, 1922).

After visiting for the first time in October 2001 I returned to the Death Valley three times. That first trip took me from San Francisco to Death Valley, Las Vegas, Grand Canyon and back. It was the first time that I discovered the beauty of the American southwest. The years that followed I explored it every time I had the chance. My last trip to the valley was in November 2009, when we drove to the park from Las Vegas. No matter what direction you’re coming from, when you enter the valley you’ll be struck by the spectacular terrain which changes from High Sierras to desert, a valley like a vast emptiness all around you, the mountains high, far away in the background. It feels like you’re leaving the rest of the world behind you, and all you can see except for the empty landscape is the straight road up ahead, disappearing into the horizon. You might as well be on an alien planet, in some undiscovered solar system. And still … Despite the apparent starkness there’s plenty to see. You have canyons, craters, bright colors, sand dunes, good looking ruins, grand views, even rocks that move. For those seeking solitude this is the perfect place. Even if some attraction points might seem a bit crowded, if you leave those behind within a few minutes you’ll find yourself completely alone, nobody driving either way, wind blowing in your ears, thousands of acres of land without a human soul in sight.

Even though at first the valley might appear featureless that impression is false as there’s plenty to see. My must see sites in Death Valley include:

Made famous by Antonioni’s film with the same name (1970) Zabriskie Point offers some beautiful views of the Golden Canyon badlands. The yellow and beige colored hills were once lake bottom sediments. The point is named after Christian Zabriskie, an important figure in Death Valley borax mining. 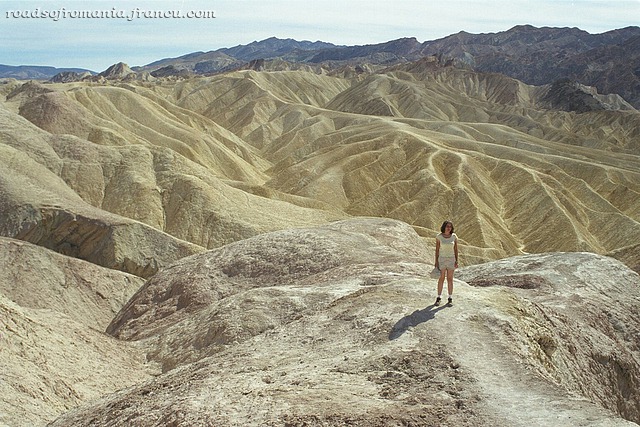 This is a one-way nine miles scenic drive through hills splashed with colors from mineral deposits. There are reds, yellows and pinks from the iron salts, green from decomposing mica, and purples from manganese. About halfway through the drive is Artist’s Palette a remarkable spot which is worth a stop. 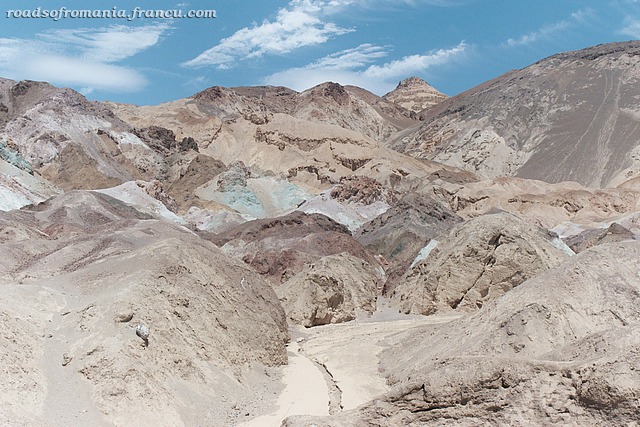 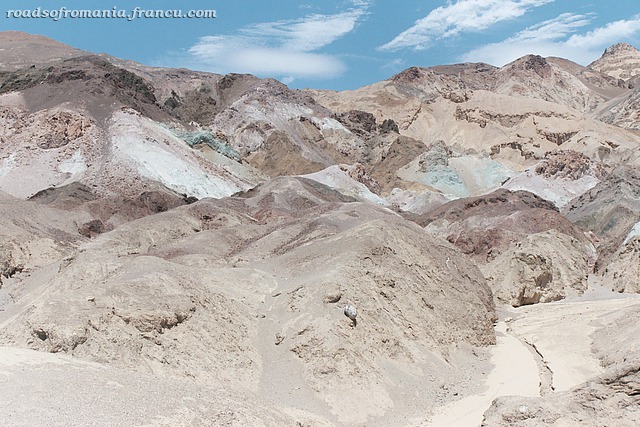 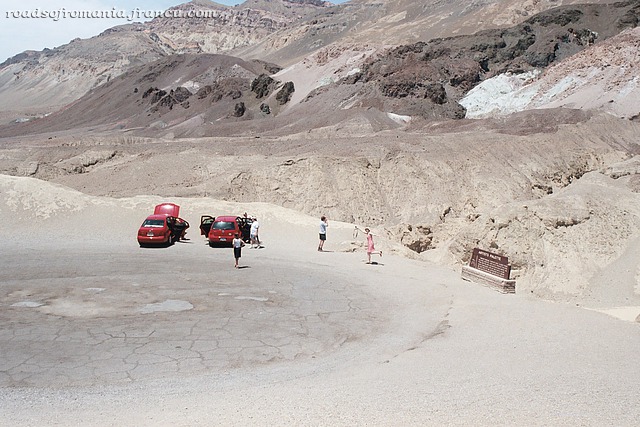 Located very close to Stovepipe Wells are the undulating sand dunes. They are being continually recreated by the winds which carry sand from the mountains and then deposit it here. The dunes can be explored by foot (park on the side of the road). There is no trail, but that is part of the fun, you can create your own trail. 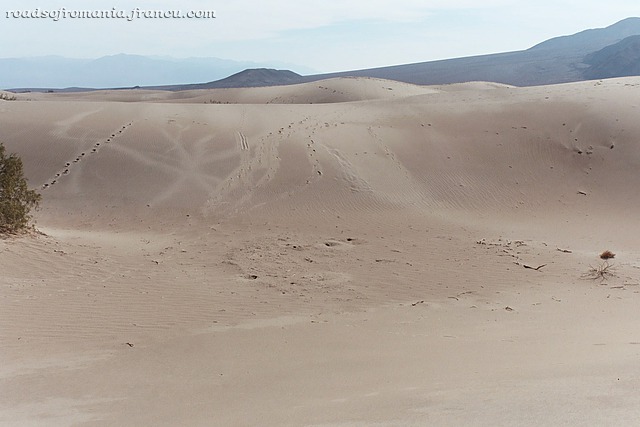 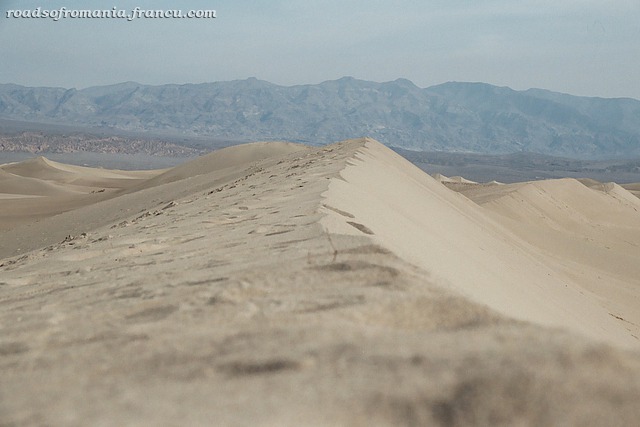 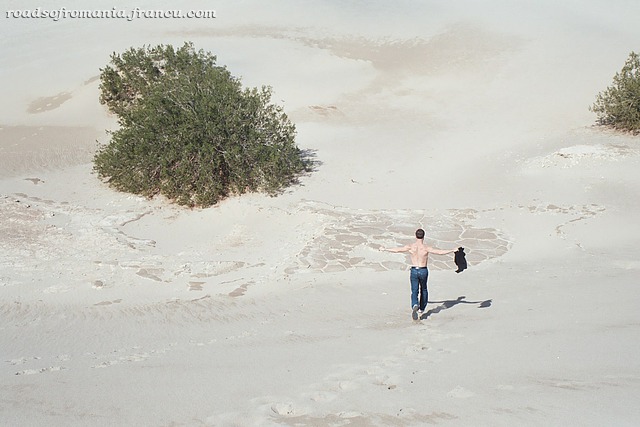 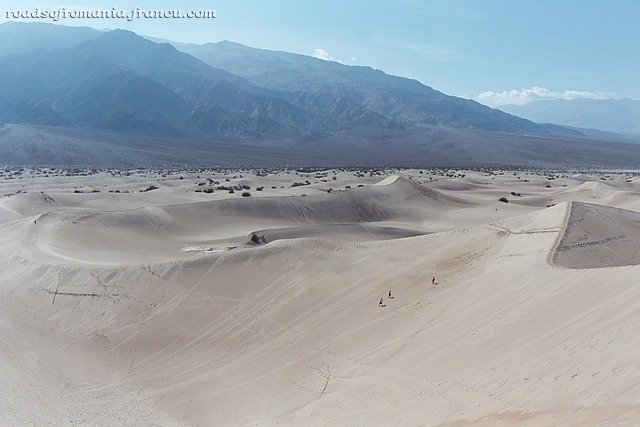 A field of salt pinnacles today, this used to be a lake more than 2000 years ago. When the lake evaporated, it left behind the layers of crystallized salt. This is constantly recreated as salty water is brought to the surface through capillary actions and then it evaporates resulting in new salt crystals. You can hear the noises made by the salt as it expands and contracts with the changes in temperature. 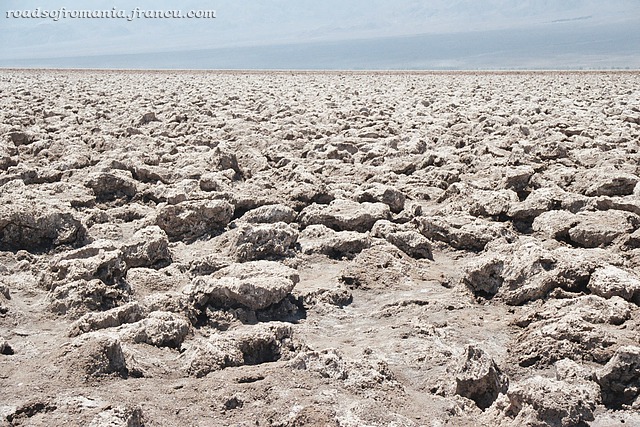 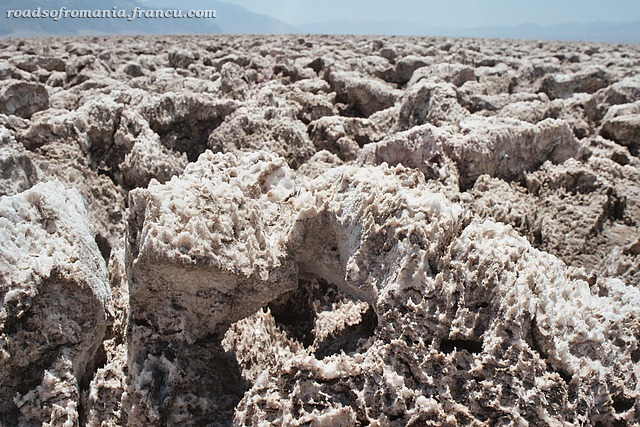 Badwater is the lowest point in the western hemisphere, 282 ft (85m) below sea level and also the hottest spot in the park. There’s a small pool of water which surprisingly hosts life (if we were to believe the signs that mark the spot). Turn around and look up the rocky wall to find the sign that marks the sea level. 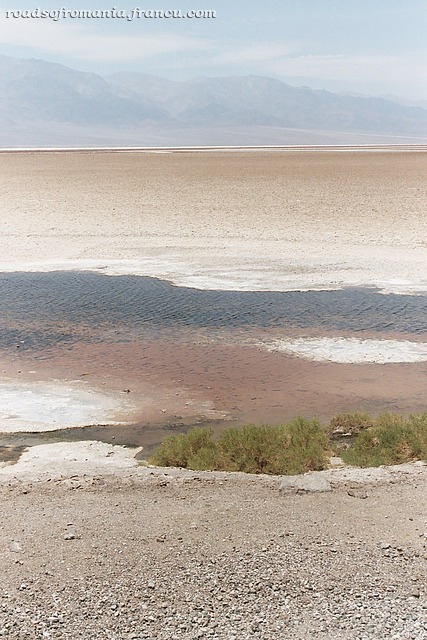 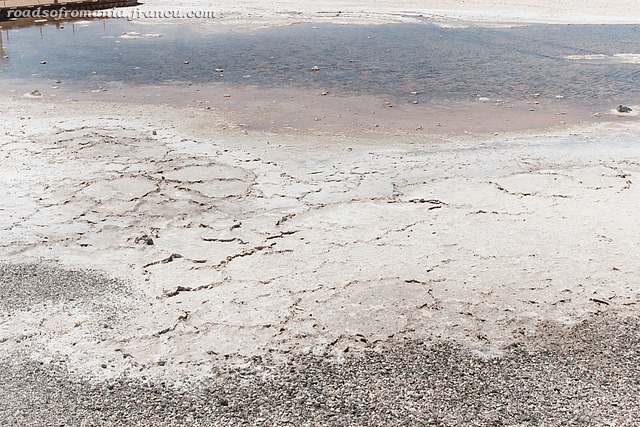 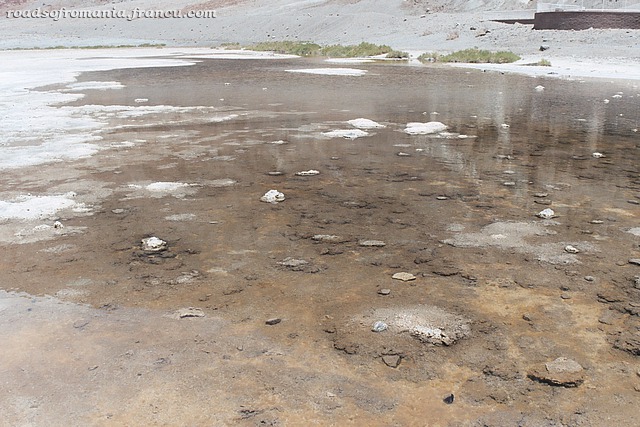 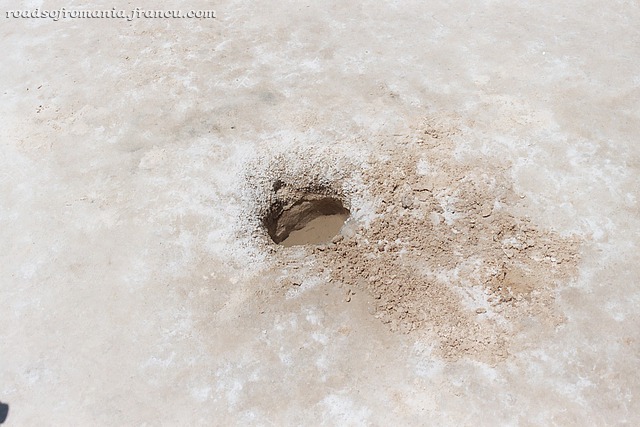 Dante’s View is situated at 5475 ft (1650m) on a peak of the Armagosa Range. It offers a spectacular view of the Valley below surrounded by ranges of mountains. This is where you experience the “big picture” of Death Valley. Pools of Badwater lie below; across the valley is the Panamint Range, with its highest point Telescope Peak. 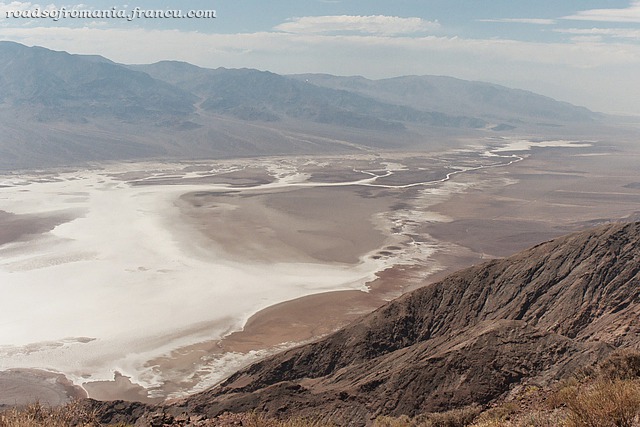 The Ubehebe Crater is located in the north of the Valley and it’s quite a drive to get there. But if you plan to see Scotty’s Castle then Ubehebe is only 8 miles away from the castle. The crater was formed by a massive volcanic steam explosion a few thousand years ago. There is a trail to the bottom of the cone. 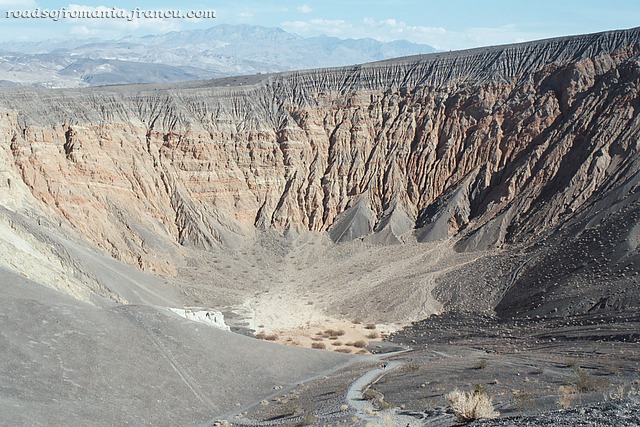 And the list doesn’t stop here. If you have the time to explore more of the park you can also visit Scotty’s Castle, Twenty Mule Team Canyon, the Natural Bridge, Harmony Borax Mines, Devil’s Cornfield, Titus Canyon etc. There’s even a spot where one can look at the tracks of some mysterious sliding rocks at, a place called the Racetrack which I have yet to visit (the road is in really bad shape and we’ve been warned that many cars have lost all 4 tires trying to access it so we didn’t dare to try it in our rental car). The biggest hurdle for all these visits is time, since the park is huge and it takes time getting from one point to another. I recommend that you give the park two days, spending the night here, this way
you’ll have more time to see all the park has to offer.

I hope I convinced you to visit and that if you ever find yourself in the American southwest you’ll take a detour and see Death Valley. In my next post I’ll talk a bit about the planning needed to visit Death Valley. 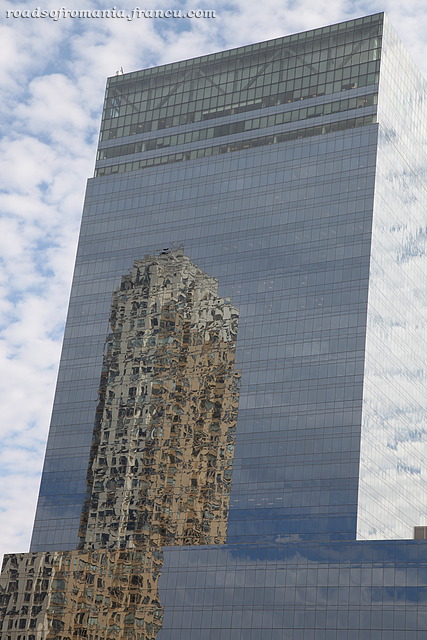 I didn’t take any pictures on October 29th because I spent all day in the airplane and on airports, returning from New York back to Bucharest. The picture above was one of the last I took on October 28th. 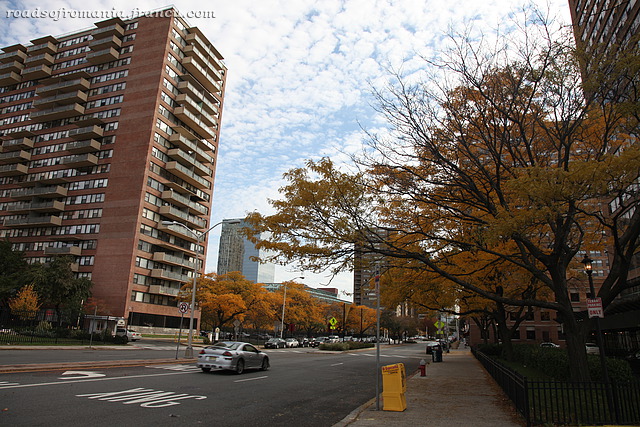 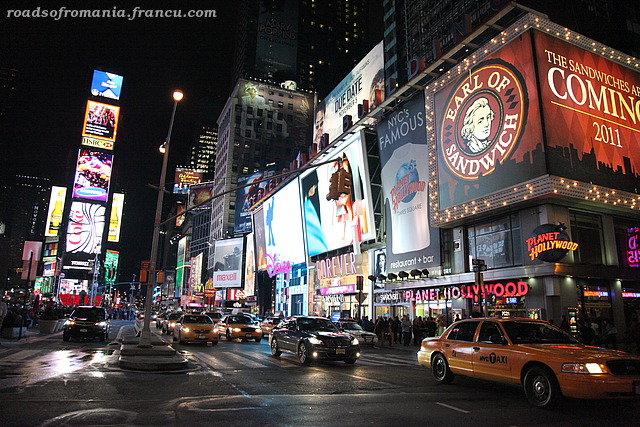 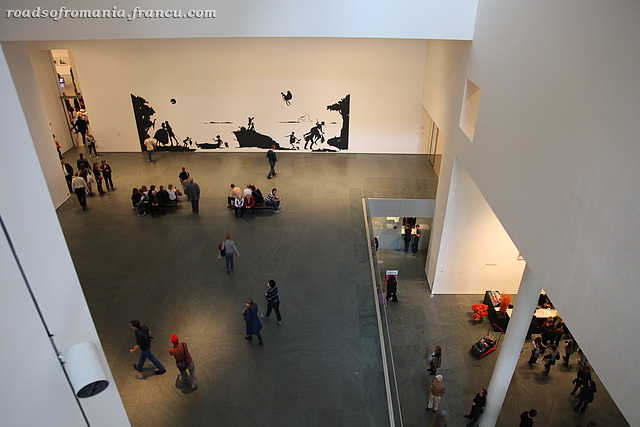 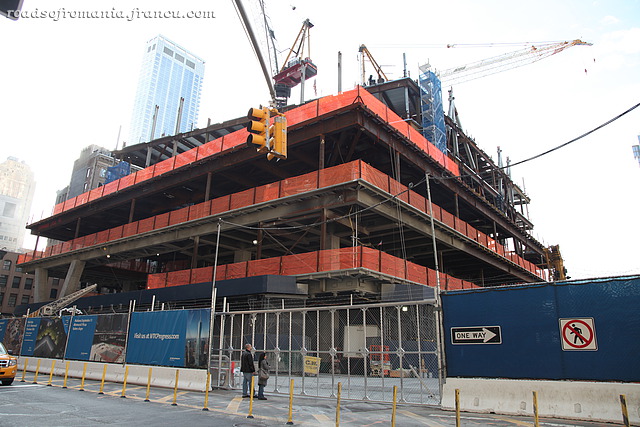 New York. Construction going on at Ground Zero for the September 11 Memorial. 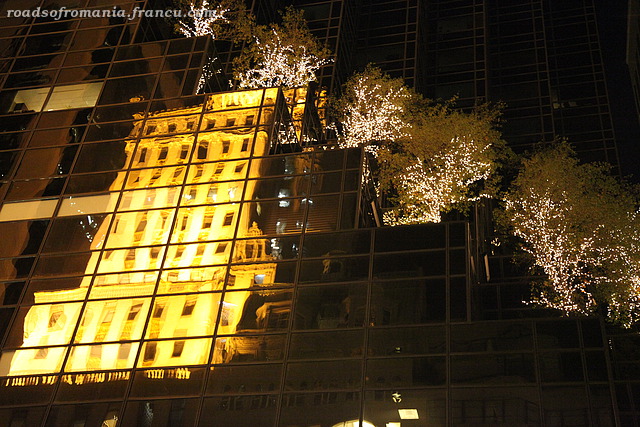